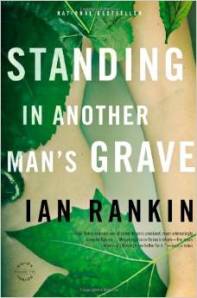 If you’re a reader, like me you may keep either a written or mental list of writers, series, or books that you’d someday like to try.  Longtime mystery author Ian Rankin has been on my list for about a year or two, now.  In fact, last year, I tried one of his stories not connected to his Inspector Rebus series and for whatever reason didn’t connect with it.  Rankin’s 18th novel in his Rebus series was available at my local library, and, as the mystery itself sounded intriguing, I decided to give him another shot even though I know almost nothing about the series.

Almost to my surprise, I enjoyed Standing in Another Man’s Grave.  Rankin slips information necessary from previous books in with newer material, and as a result, I felt like I was reading the beginning of a new Rebus series.  There’s something particularly comfortable about older codgerier (okay that’s not a word) detectives.  They have at their stage in life little desire to make themselves look good–their interest is the work.  Rebus is pretty typical of fictional detectives these days.  He’s unorthodox, doesn’t follow the rules, has several vices, and is smarter than almost everyone else in the book.  Rebus is so typical I thought I would be bored by him, exasperated even, but I was not.  Maybe it was the setting.  Having been to Scotland, including Edinburgh and Inverness, I could picture a lot of the places and roadways, and that’s always a bit exciting as a reader.  Maybe it was the fact it was a cold case.  Cold cases can often be more intriguing simply because the mystery of whodunnit has lingered for so many years.  (Incidentally, this is exactly why Zodiac is one of my favorite movies).  Maybe it was just the fact that Rebus is older.  Old detectives are pretty awesome, from Hercule Poirot to the Peculiar Crimes duo of Bryant and May.  And, let’s not forget Miss Marple.

This post is a shoutout to Mr. Rankin for having a storyline and hero engaging enough that even in his eighteenth installment, Rebus delivers and makes me want to read the series from the beginning.

Since so many readers are always in search of a good mystery, I offer a few series that I have enjoyed over the years in addition to this one:

Frank Tallis’ Vienna murder mystery series. (For those who like history and psychology.  The descriptions of food and music add a unique aspect as do many of the plots that revolve or hint at the future atrocities of the Third Reich)

Dorothy L. Sayers’ Lord Peter Wimsey mysteries.  (Gaudy Night is the best one, but the series as a whole is outstanding and a good exploration of a upper class detective and his not so easily won lady love, Harriet Vane).

Elizabeth George’s Inspector Lynley series. (Set in the UK, as with most of these, and also involving an upper class detective.  I enjoy the mysteries, but not so much Lynley’s complicated love life.  His partner, Barbara, is awesome.  She rankles against his poshness to great effect.)