I don’t read a lot of Poe, but his tales are deliciously thrilling and often tragic tales of the consequences of doing evil.

I’m watching The Following on Netflix.  It’s a show about a cult of murders who have chosen Poe as their icon.  Poor E.A.P.  The vast number of mostly brainwashed murderers in this series think they are awesome for what they are doing.  Nothing could be farther from the truth: Just about any person on this planet has the ability to murder someone else, to hurt someone else.  It’s not a unique or even special gift, no matter how elaborately done.  The rarer gift is that of mercy, of edifying people (I need to remind myself of this more often than I do).

The murderers in The Following can’t hold a candle to Poe.  Poe was a genius of a writer, the essential inventor of the Sherlock Holmes stories we all still love today.  His stories were most thrilling because of one element: Horror.  Horror, not simply murder.  Poe considered himself a genius (rightly), these murderers consider themselves genius, I get it.  They don’t seem to get, however, that the horror of stories like the “Tell-Tale Heart” are entirely due to guilt and the killer’s own fear of death.  These people are sadly misunderstanding Poe.

That’s not to say The Following isn’t an interesting, thought-provoking series.  It’s just a shame that Poe’s great body of work is so often reduced today to nothing more than the worship of death and killing.  I for one, don’t think that’s what Poe was really about.  Was he plagued with problems?  Sure.  What being walking this planet isn’t?

What do you think?  What’s your perspective on Poe?

Trolls and caves go hand in hand.  This story explores what a cavern domain would be like and also a Tolkien-ish problem of two species trying to share a world in which they don’t get along.  Also, I have to add that the funnest (ok, I know it’s not a word, but ‘most fun’ sounds wrong to me too) part about writing stories is coming up with names for the characters.  If you like my stories, please check out the Trolls for Dust ebook now available from Barnes and Noble and Amazon.       –Pixie 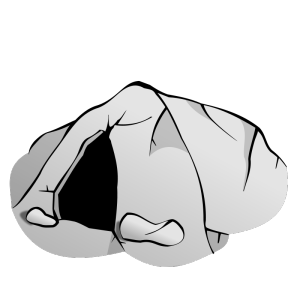 They came for Bryne, swarming over the stalagmite-ridden caverns in hords, knocking down lime sculptures and stalactites that were thousands of years old.  The trolls were swarthy, stubby and wore burlap clothes that hung with fallew-lichen, and other mosses of the Deep.  Kryle saw them first and interrupted…

To read nine original stories that all inspired my new book series about the fictional television show, Trolls for Dust, visit trollsfordust.com in the next couple of weeks.  Happy Reading.  –Pixie

ABC Family’s series Twisted is a show that fits in comfortably with another ABC hit series, Pretty Little Liars.  Like PLL, Twisted follows three friends who are wading through mysteries and lies surrounding their childhood.  Danny Desai (Avan Jogia), who in junior high murdered his aunt with a jump rope is out of juvie on probation and comes back to town seeking a renewed relationship with his childhood friends Lacey Porter (Kylie BunBury) and Jo Masterson (Maddie Hasson), both of whom were traumatized by what he did five years ago.

Twisted has two main things going for it: A fairly unique plot revolving around the question is Danny really a killer and a sociopath, and its casting.  It’s refreshing to have a couple of main characters who are minorities, yet have characters that don’t hinge on that fact.  Any race could play any of the parts, and ABC chose actors right for the role regardless of race.  Avan Jogia does a great job playing Danny Desai and especially in the first few episodes, everyone is wary that they are being manipulated by his character.  Kylie BunBury also does a fantastic job with Lacey, a girl who doesn’t easily show her emotions, and she comes off far more emotionally mature than Jo, who parades her emotions around for all to see.

That’s not to say that I don’t like the character of Jo.  She’s fun, plucky, and the kind of person you’d want as a friend.  However, the way the show portrays her in the last few episodes of season one is cringeworthy.  She comes off as extremely childish and having to constantly be patronized by those around her.  This is the big flaw in Twisted, that the last few episodes aired revolved around Jo dealing with something that for a teen is heartbreaking, but put a bad light on all of the characters walking on eggshells around her for something that they should NOT have to apologize to her for. Hopefully in the upcoming second half of season one, the writers will have corrected this issue.  Twisted isn’t the “Jo show,” and if anything, should be the “Danny Desai show.”

Why Twisted Would Make a Good Book Series:  The mystery behind Danny’s action promises to be unwrapped over several seasons and could also fill a few books.  Not only is he hiding something, but so are the main three’s parents, echoing another ABC Family series based on a book series, The Lying Game (sadly this one was cancelled after a couple seasons).  It also has the quaint, small town atmosphere begging for description and amusing side characters such as Jo’s friend Rico (Ashton Moio), who is adorably awkward and will make a nice fourth to the three mains once he comes into his own.

Aside from the past murder that occurred, Twisted hasn’t actually been that, well, twisted, but the mystery has promise of being a vast, unwinding conspiracy, and in later seasons we’ll likely find that the characters we are following are more complex than originally thought.  An intriguing question is brought up early on: What is a sociopath and can you tell of someone is just that?  The implication is that perhaps Danny or even one of the other characters is in fact a sociopath, manipulating everyone — okay, at least that’s where I hope the writers are going.

Twisted is back on the air next week on February 11th, 9/8 central at ABC Family. 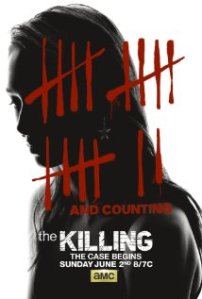 In its first season, AMC’s The Killing took me a little while to warm up to, and I only watched a few episodes before deciding it wasn’t for me.  I then rediscovered the series on Netflix and was hooked.  The Killing, based on a Swedish crime show called Forbrydelsen, is set in Seattle, Washington, and follows a similar plot.  Detective Sarah Linden (Mireille Enos) is called to begin one last case on the eve of her last day at work.  She is planning to give up detective work and move to California with her son and to begin a new, married life with the man she loves.  The discovery of a teenaged girl’s body in the trunk of a car presents an intriguing and heartbreaking mystery for Linden, and the detective finds herself continually delaying her departure for her wedding.  Linden is joined in her investigation by a newly promoted narcotics officer, Stephen Holder (Joel Kinnaman), whose methods are slightly unorthodox.

Why The Killing would make a good book series:  Its pacing and somber tone.  The Killing is not for those who want quick action and resolutions.  Much like a good novel or book, this series is slow-moving and character development is more important than merely moving the plot ahead.  The doom the audience and detectives feel in the first episode slowly grows over time as the threads of mystery begin to unravel.  It is a credit to the series that time and time again, things are discovered to be far different from first impressions.

The tone of the film is almost entirely due to its setting. Seattle is portrayed as a continually cloudy, gray city.  The colors in each shot are subdued and the music haunting.  The death of a girl is treated seriously, as are the efforts of the detectives, despite their obvious flaws.  Detective Linden’s obsession to the case is easy to relate to, as is Holder’s eagerness to prove himself in his new position.  The acting is much due to the fine characterization and writing of the series, though, I have to give Joel Kinnaman a special shout out for his awesome American accent.

For me, the series really came into its own in season three, where we find how truly flawed Detective Linden is, and how capable Detective Holder.  The series balances highlighting the detectives faults against their perseverance and natural talent at mystery solving.  So many scenes from season three shouted “literature” to me, due again to the mood of the show as well as the excellent characterization.  Also, the detectives are never quite happy.  This too, goes along with literary tradition.  Few, if any book detectives, have anything resembling joy outside of their work.  Their work is their happiness, everything else is secondary.

Something that makes The Killing stand out for me as well is that the victims are important.  Too many murder mysteries focus solely on the smarts of the murderer instead of sorrowing over the plight of the victim.  The important people in the series are the detectives, the victims, and the people who knew the victims.  The murderers themselves are rightfully forgotten by the time the next mystery begins.