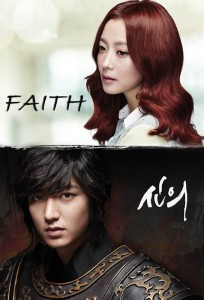 If you have not experienced the awesomeness of K-drama, or Korean TV dramas, I highly recommend giving them a view.  The set up is a bit different than American TV shows, the episodes are an hour or more long, and there’s usually only one “season” or anywhere from 16-30 episodes in each drama.  Given that the stories have a definite end point instead of yearly “will they or won’t they” renewals and extra seasons, the writing, acting and storytelling are stellar and don’t suffer from consecutive seasons that become more mediocre after each year.

The Great Doctor or Faith is a historical drama and romance set in the 1300s during a time when Korea or Goryeo is under the heavy thumb of the neighboring Chinese Yuan dynasty.  The young king is returning with a new queen to his homeland after years of living as a hostage in China.  The king and queen are being transported by a small group of royal guards called Woodalchi.  They are led by weary warrior Choi Young who has been serving for royals for many years.  They are attacked during the journey and the new queen is wounded.  Only a powerful surgeon can heal her, and one of the king’s advisors suggests going to a place he knows of with a magic gateway to heaven where a famous ancient doctor is said to have gone.

The gateway still exists and Choi Young is sent on a quest to heaven to find the great doctor.  “Heaven” is actually modern day Seoul as the “gate” turns out to be a wormhole bending time and space.  In a happy coincidence, Choi Young enters the future in direct vicinity of a plastic surgeons convention and kidnaps a surgeon named Yoo Eun-Soo after giving her a practical test to gauge her surgical abilities.  The show could have easily just run with the fish-out-of-water theme that it plays up in the first few episodes, but the writers smartly kept that to a minimum and focused more on the drama surrounding the king and queen and how the two protagonists deal with that and begin falling for each other.

From the first episode to the last, the production of The Great Doctor is a stellar, movie-quality experience.  The story drags a little at the end, but it’s mostly character driven with plenty of action.  If you don’t like the characters at the beginning, they will feel like old friends by the 24th episode.  There aren’t many special effects, but what is shown doesn’t look too corny.  The magic in the world is left partly unexplained, but the character and action more than make up for that.

Much of the series reminded me of the book series Outlander in which a WW2 nurse gets sent back to ancient Scotland and falls for a younger warrior.  Except this version is far more charming and romantic and doesn’t rely on sadism as a way of furthering the plot.

At first I thought Yoo Eun-Soo played by Kim Hee-Seon was annoying and acted a bit childishly for her age, but Kim won me over especially in the second half of the series as her character begins to bloom under the love of Choi Young.  Young is played by the popular and easy on the eyes Li Min-Ho who came to fame from the comedy series Boys Over Flowers (if you love high school shows and comedies do not pass Go, do not collect $200, but go directly the Kdrama app where you can watch the series for free).  His character is my favorite simply because I enjoy exploring the plight of the “faithful servant.”  He’s killed hundreds, possibly thousands of soldiers and others all at the request of the kings that he serves and his soul (Seoul, ha, ha!  Okay, I’ll stop being so punny) hurts because of it.  He’s damaged in a way that I cannot comprehend, but that I’m sure many of those who are soldiers and good at it can.

Like most shows and films The Great Doctor wasn’t easily made.  It suffered from production delays and the lack of a lead actor after the first and second choices for Choi Young fell through.  Li Min-Ho stepped up to the plate and did a decent job.  He’s a bit younger than the age the role calls for, but Li is believable as the captain of the royal warriors because he commands wonderful screen presence…and he’s tall. 🙂  Okay, all the warriors are tall (at least to me, I’m 5’3″– okay 5’2 and 1/2″), but Li was a good choice as he’s an expert at sporting a sort of bored “I’m cool” expression well-suited to a warrior who has probably seen every atrocity under the sun.  Also, the King Gongmin played impressively by Ryu Deok-Hwan is tiny!  At least, he appears that way in this production.  Ryu does a great job portraying someone who simultaneously has a lot of power and no power and who struggles with it constantly.  The king’s personal struggles with power over his own life mirror that of his best warrior, Choi Young, and their relationship is in a way more interesting than that between Young and the “great doctor from heaven.”  Also, the king and queen’s relationship is sweet.

I love romances, and the love story in this is wonderful with lots of funny moments and many touching, endearing ones.  By the end you just want to shout out the Jerry McGuire line: “You complete me!”  Yoo Eun-Soo fills the ache in Choi Young’s heart and vice versa.

One more shout out, and that’s to the soundtrack people.  The main theme is especially addicting and reminded me somewhat of the Pirates of the Caribbean music.