It’s like people are determined to ruin my childhood or something. Okay, okay, drama aside, let me explain. The books, the books that defined my teenage years for me were, okay, yes, the Anne of Green Gables series, and, yes, Little House on the Prairie, and various teen romance series that were probably too steamy for me to be reading, and Robin Cook thrillers, and Isaac Asimov sci-fi extravaganzas… but I digress. Where was I? The series that I loved, one of those that almost clammer for a screen adaptation, but resolve themselves to staying literature only, was The Kingdom series by Cynthia Voigt.

What I loved about the series was mostly the second book, On Fortune’s Wheel, which is terribly romantic, but the third book, The Wings of a Falcon ended up ultimately being my favorite as I got older. Something about two friends making it through everything…it just sticks with me to this day. The first book is Jackaroo, the plot of which at first seems like a knockoff of Robin Hood. And it is, sort of, but the world of The Kingdom, quiet, contemplative, and somewhat melancholy, draws you in. The series just has this rare quality of making the reader feel like you are there. You are going through this, too. This quality is likely why Voigt is such a successful writer of young adult stories.

Anyway, I learned today, just in looking up the series to see if I wanted to buy newer copies, that um, they’ve changed the titles. All of them. Well, the fourth book, Elske, is now The Tale of Elske, and it’s my least favorite of the series, so that one didn’t disappoint me too much.  But the others! I just can’t believe it! Jackaroo, On Fortune’s Wheel, and The Wings of a Falcon have all been changed to The Tale of Gwyn, The Tale of Birle, and The Tale of Oriel. Three wonderful, intriguing titles exchanged for stupidly bland titles that fail to reflect the fact that The Kingdom books, although set in the same world, aren’t sequels, aren’t part of a large, overarching quest or plot, and are each really their own stories almost entirely. It’s almost as stupid as changing D.M. Cornish’s awesome series title Monster Blood Tattoo into Tales from the Half-Continent.

Why do publishers or authors or whoever do this? Blander titles are supposed to sell more books? Really? It would be like me changing my series, Trolls for Dust, to Vale Studios. Boring! Now, if they’d changed them to more interesting titles, I would maybe be on board, but this… Well, my childhood is long over, anyway, and one can’t go back, not really. My memories of those happy reading days will have to suffice. I will treasure my dog-eared original titles and refuse to replace them unless they become absolutely unreadable due to wear and tear.

This winter I want to read the entire series again and go through for you what I love about it and why you or your teenagers might like it too. They will be the same stories, despite the names being changed, but I disagree with Juliet. Names of things matter. Names show identity, they show who you belong to, who loves you, sometimes who hates you. Names can be blessings or curses, beatifying or insulting, and changing a book’s title is no small thing, just like changing one’s own name is no small thing. It is a transformation no matter how one looks at it. The object or person is simply different after. Most of the time, I hope, for the better, but this required a rant because the original titles are infinitely more suitable for the series, and the new titles woefully inadequate. And don’t even get me started on the new covers. 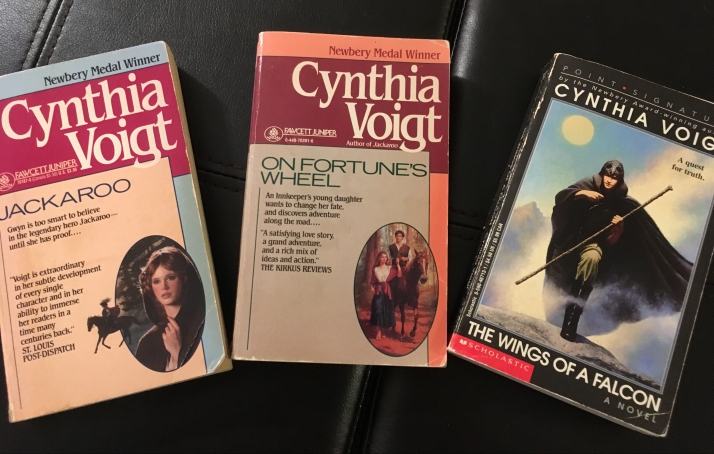 The covers and titles I grew up with.