It’s all done, and somehow it’s nice to finish a story. As for the end product, I’ll probably gift it to someone for their birthday or something. How interesting and fun would it be to have a whole room of letters and packages all written together in a grand story! Sort of like playing Escape Room, but having a Story Room instead. Maybe someday.  Happy Reading! 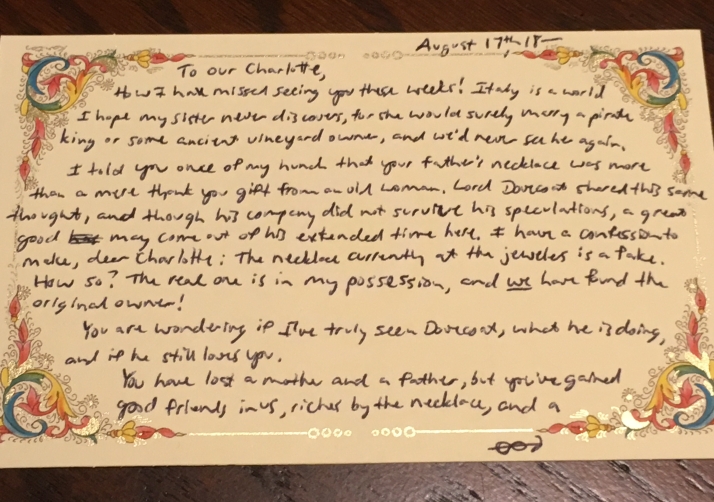 #8. From Charlotte to her friend Juniper. And I do see that Charlotte made a mistake on the envelope. Ok, it’s not really fair to blame the author’s mistake on her characters, but it’s so easy and they don’t care. 🙂 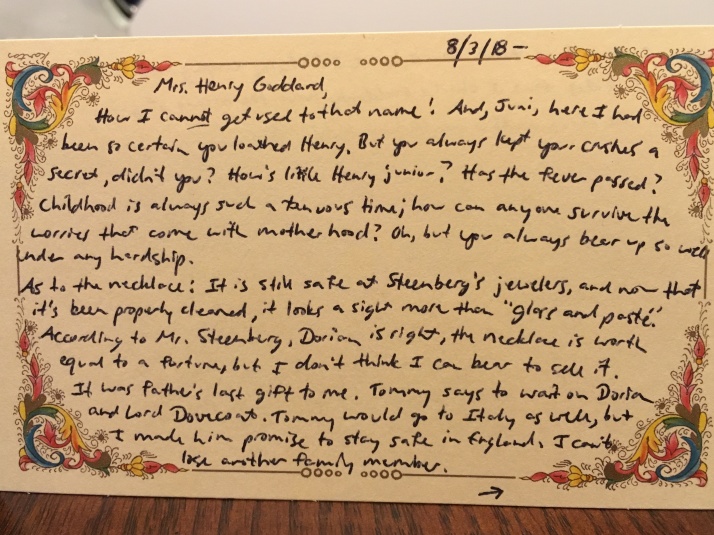 Only got one card done today.  Three to go! I get shadows in the pictures sometimes when taking them. Not sure how to remedy, as I am definitely not a photographer, but it’s likely due to the overhead lighting. Oh well. 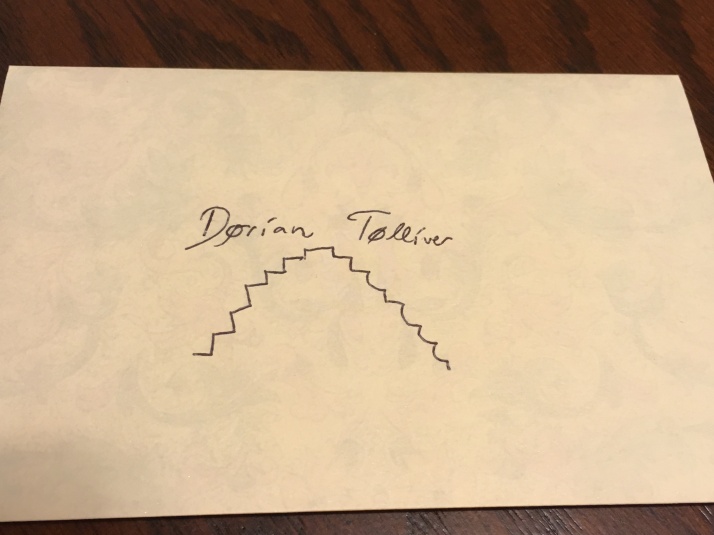 Things are working out. 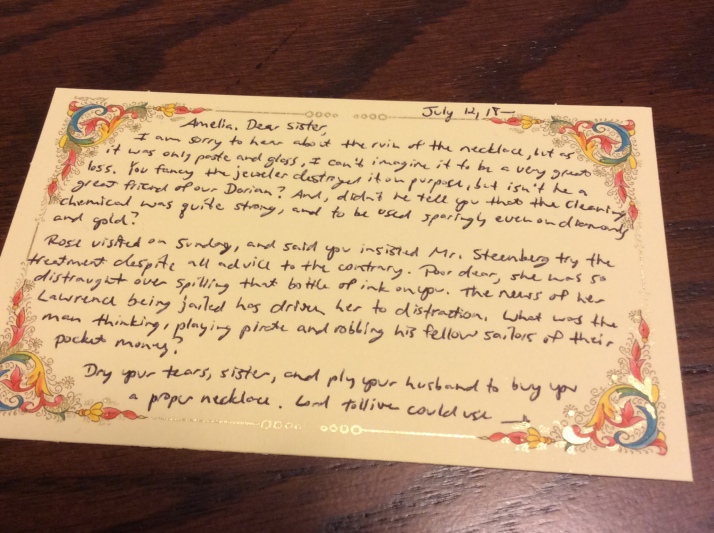 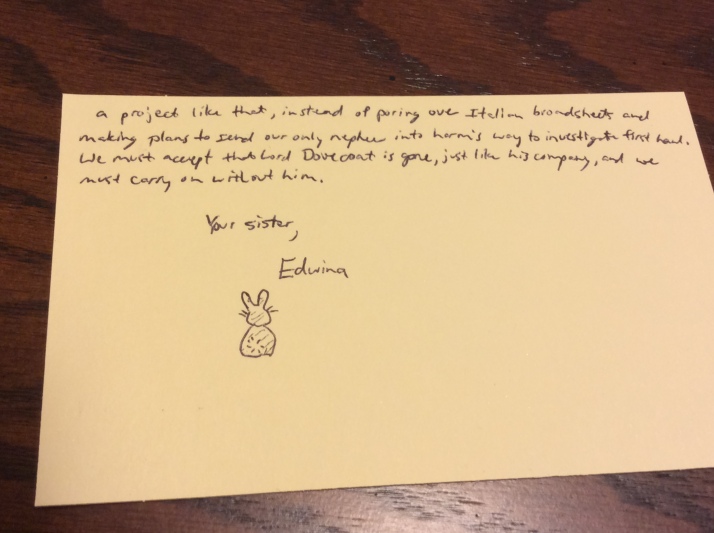 Notecard #5 is finally done. I feel like Minnesota’s been dumped into the tropics with all of this heat and humidity, but I should complain. Still better than winter. Trolls for Dust 2 is finally ready for proofreading and I shall get out my red pen and mark away all of those awful typos and misspellings!  –P. Beldona 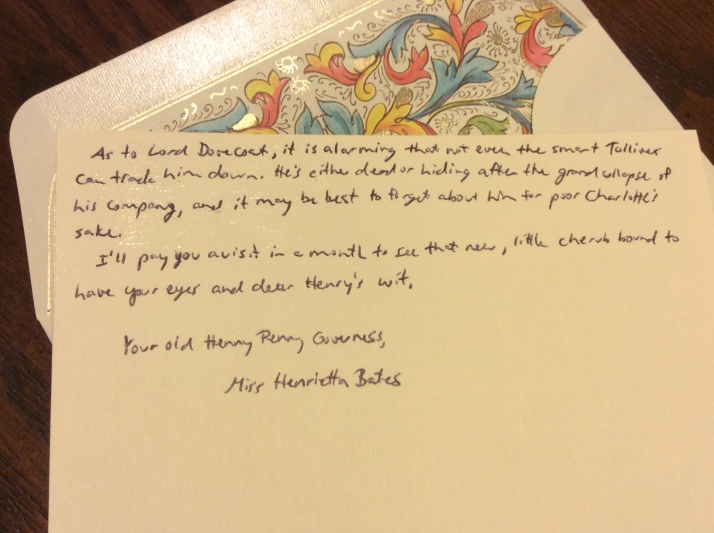 Isn’t it kind of bizarre that a very minor crash is enough to “total” a car? Maybe it’s just because I drive a really old car, but last year I was hit in a roundabout, so we were both going less than 20mph. Think how much we pay for cars, even used ones, and so many accidents and problems often cost a great percentage of what the car is worth to fix. People often complain how a health crisis can throw a family into poverty due to the high costs, well, so can a car crisis. For some, cars are considered a luxury, but in America in most places you really need them to get around. On the flip side, it’s can be a good thing that a minor accident can do a lot of damage, because it probably incentivizes people to drive safer as a whole. If we had indestructible bumper cars, it could mean more would recklessly drive, as a minor hit wouldn’t hurt them or the car.

Notecard story: Planning on getting another card out this weekend sometime. So far it has been a fun and challenging writing exercise and I’m thinking there’s potential homemade Christmas presents in this idea.

Priest slapping baby at baptism video. Not sure how viral this video is, or if you’ve seen it, but it is an amazing example of how parents and especially fathers are the main protectors of their kids. As the mom struggles even against a very old man, to get her baby away from him, it is the father’s physical strength that ultimately succeeds in the getting the kid away. As we recently had Father’s Day, it’s a great example showing how the fact that fathers are both willing and able to protect the ones they love is the primary reason they are needed. Really don’t know what was up with the priest, senility, or as some cry, demon possession of some kind, but it’s certainly scary to watch, especially because in a church and at a baptism that kind of violence is the last thing expected.

Trolls for Dust, Season Two: Revisions and proofreading are underway, and I hope to be able to share the awesome cover soon. I am really excited about this story and I am getting to reveal the longer arc of the series. In rereading Season One, it’s been fun to see that I really like some parts, some maybe could use work, but that as a book as a whole it is a good jumping off point for where Seasons 2, 3, and 4 are going. At first I thought the series would end up being a trilogy, but there is so much going on and so much material that I really want and need to do four books. Hopefully, each book won’t take four years to write, but I think as I get better at writing and storytelling and the whole process, things will come faster and faster over time.

Kid crisis/border crisis: Many Trump supports say that the biggest impact of his presidency is going to be to harshly deal with trafficking, especially child trafficking and abuse. And there’s been thousands and thousands of pedophile and trafficking rings busted all over the world since he’s taken office. The current outcry with kids being held at the US border is a part of this. Many of these children are not with their parents, but with traffickers and abusers. So, it’s just going to be interesting to see how this all plays out.

Christian apologetics: Attended a conference for that this week and just found it so crazy that like in other fields, politics, medicine, law, etc., religion is the same. People are taught lies and not shown the facts that are available. There’s so much out there indicating the Bible is true, but what is taught in many places is this lie that there is no evidence at all that the Bible is true, and people grow up believing it. Believing in the Bible and Jesus as one’s Savior from sin is a work of the Holy Spirit and of faith, but if that is indeed the truth (and I believe it is), then it makes sense that there would be some amount of actual evidence indicating that it is the truth. It’s actually similar to the whole vaccine topic, because people often hold a different, higher standard for evidence for those two things above and beyond what in regarding other topics and fields they would accept as sufficient evidence. It’s fascinating and it really hit home to me that what evidence is accepted by the individual ultimately says more about the individual than the subject under consideration. We have a harder time with the facts and insist on more evidence when something does not confirm what we already believe, but readily accept almost any evidence that supports our current beliefs. This way of thinking is our nature and very hard to overcome to truly look at and judge things objectively.

So, I am proceeding with my attempt at telling a story in ten notecards.  The era is vaguely Regency, though my no means authentic and my cursive and penmanship are both hideous. This first card is from a Lady Tolliver to her sister, a Mrs. Albert Munch. 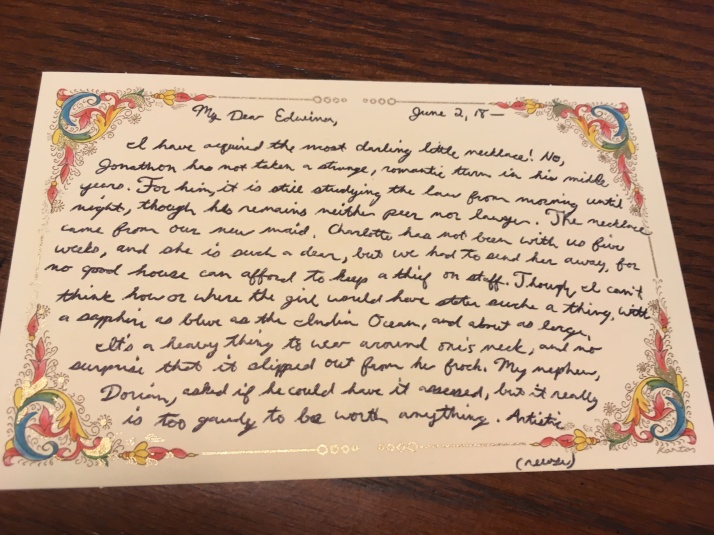